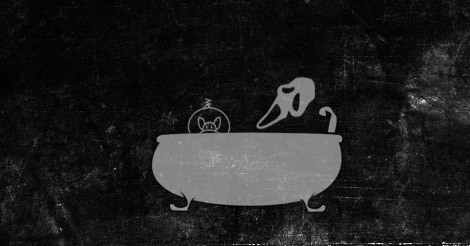 I’ve always been the kind of creep who would stand silently and patiently outside your window, until you look up from the novel you’ve been reading, the dishes you’ve been doing or the horror movie you’ve been watching, so that I can stare blankly at you; an expression I practised and mastered on long evenings when Achan forgot to pick me up from school or tuitions.

Of course, staring blankly from windows is considered romantic when the glittery vampire or Nivin Pauly does it. However when I do it, it is usually and naturally followed by screaming accompanied by books, La Opala dinner sets or laptops getting thrown at me.

Even though I generalize, my victim has been mainly Gingi; except for the time when Aparna, Akansha, and I decided to stand outside the window of a room where a few people were engrossed in The Conjuring at 4:20 AM. Then again, there have been times when I didn’t have to pull the window stunt and Gingi would scream and run anyway.

John Pereira, a ghost with an odd bathtub affinity from Tehkikaat, the Doordarshan classic, was the biggest and longest running terror for both Gingi and me back then. On a possibly moonless night, we were sitting on our rooftop when Gingi started with an impromptu ghost story featuring John Pereira. Two sentences later, she got scared listening to her own story, screamed and fled, storming down a not-so-precarious ladder. Everything was so out of the blue that I was still sitting there trying to figure out what had just happened.

On another possibly moonless night, during power cut, Gingi was waiting for me to step out of the loo, planning to startle me by making strange noises and manifesting from the darkness. I think this was the beginning of her ich bin Vampir phase (or the ichichi vampire phase as I liked to call it). Unfortunately for the both of us, I decided to exit the loo through the other door that led to our parents’ room. After a while, Gingi became bored and slightly confused, and decided to give up. As she walked out of the room, I was flapping my arms and groping my way into the room. What followed was a collision, a screaming younger sibling bouncing off a screaming elder sibling, twenty seconds of silence, hysterical laughter, and verbal blasting from Amma.